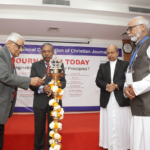 The Indian Catholic Press Association (ICPA), a premier organization of Catholic journalists, dailies and periodicals in India, invites nominations for three annual ICPA awards to be conferred on selected journalists/writers/publications during the forthcoming National Convention of Christian Journalists to be held at Don Bosco Bhawan, Okhla, Delhi on 29 February, 2020. The awards are in the following categories: […]

The 24th National Convention of Christian Journalists being organised by the Indian Catholic Press Association (ICPA) and the 55th Annual General Body meeting of ICPA are scheduled to be held at Arnold Vikas Sanchar Sadan, Mother Teresa Road, Cox Colony, Jharsuguda, Odisha from March 1-3, 2019. The theme of the convention, which will be held […] 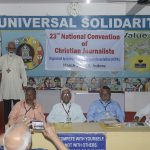 The 54th Annual General Body meeting of the Indian Catholic Press Association (ICPA) was held at the Universal Solidarity Movement (USM) of Value Education for peace, Indore on 10 March 2018. The meeting began with a hymn to the Holy Spirit led by Srs. Tessy and Rosely and a prayer by Fr. Varghese S.J. President […]